When The Cinnamon Club opened its doors in Westminster in 2001, it became an instant London Landmark thanks to its combination of exceptional Indian fine-dining – a concept new to London at the time – and imposing surrounds of the Grade II-listed Old Westminster Library.

As the renowned restaurant celebrates its 15th anniversary this year, we talk to Executive Chef and CEO Vivek Singh, arguably one of Britain’s best-loved Indian chefs, about his recent £1m refurbishment of the iconic restaurant space and exciting new menu…

The Cinnamon Club’s surrounds of the Westminster Library feature book-lined shelves and grand, traditional features, while your menu focuses on pioneering, contemporary Indian cuisine. How important is this mix of tradition and innovation to the restaurant’s success?

Ever since we opened, the juxtaposition of the old and new, tradition vs innovation, east vs west has been a very important part of experience at The Cinnamon Club. I still remember referring to The Cinnamon Club as ‘new Indian cuisine in the Old Westminster Library’, and this constant play is as much a part of The Club experience as anything else.

This rather dynamic marriage of the old and the bold, alongside constantly evolving menus has ensured over the years that The Cinnamon Club experience always remains fresh, stimulating, challenging and familiar, all at the same time.

You’re constantly pushing boundaries with your cooking, for example, your Indian-inspired Game High Chai – a quirky twist on English afternoon tea served in sister restaurant, Cinnamon Soho.  Where do you find inspiration?

A lot of the philosophy at The Cinnamon Club revolves around the three C’s; connect, context and combine. I draw my inspiration from traditional Indian dishes that may or may not be already familiar with wider audiences. I like to update them and present them in a way that surprises guests, allowing them to take notice of what they thought they knew very well – this is the connect part.

Context, for me essentially recognises that food doesn’t exist in a vacuum; it’s often part of a wider context, be it a celebration, a family gathering or a festival. Doing something that is topical always catches attention, for example we may put flowers in our dishes during the time of the Chelsea Flower Show, or during the game season we will adapt our menu to this, one of our signatures dishes is seared Mallard duck breasts with sesame tamarind sauce. By drawing inspiration from both sources, combines it in two different degrees, and keeps our offering fresh and interesting.

Your recent £1m refurbishment of The Cinnamon Club has incorporated some beautiful design features – from the teal blue banquets to the marble table tops and mid-century dining chairs. What did you want to achieve with this new look and feel?

Much like the rest of our being, we’ve always maintained the attitude that standing still is not an option. Although we started the refurbishment as a kitchen upgrade – and believe me, no one ever said that the dining room needed a change – we took the opportunity to look at which elements of the room people loved the most, it then became an endeavour to give more of what they loved, and less of what they liked least. It’s always tricky to change something in a dining room that has been around as long as The Cinnamon Club has. It is a fine balance to achieve, but we are delighted to know that it has been loved by old and new guests alike. 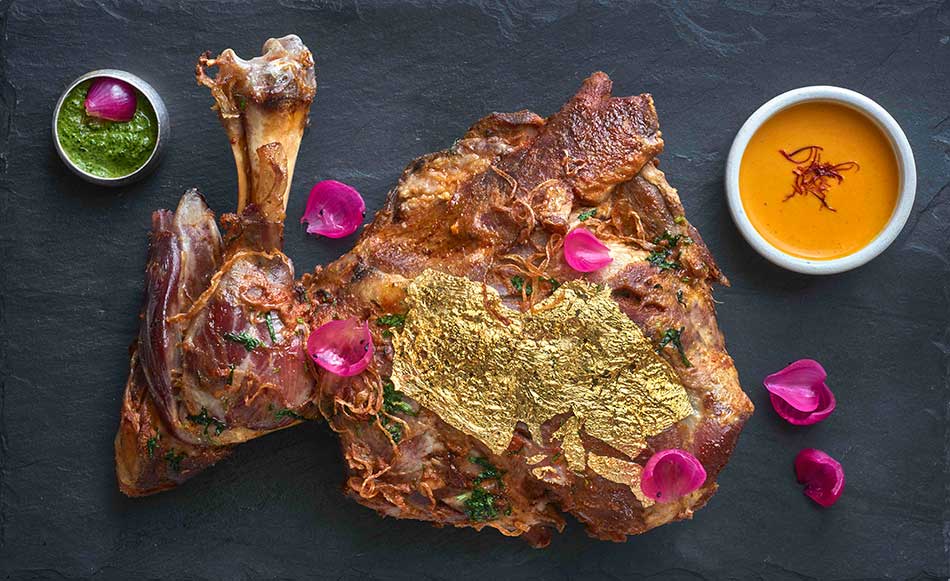 The menu has also changed – what new additions can diners expect when they visit The Cinnamon Club in 2016?

Rakesh and I worked together to develop a refreshed menu, featuring the best of The Cinnamon Club, past and present. The Cinnamon Club’s take on game and fish dishes, and its endeavour to creating a memorable dining experience for the individual diner stays the same, however we have also introduced a selection of sharing dishes, that are brought on trollies and served tableside. One of the big draws of The Cinnamon Club’s dining room is its sense of occasion, and our new sharing, celebratory feasts, fit very well in this context.

You’re renowned for defying trends and creating unusual fusion dishes – why is this so appealing to diners?

Familiarity breeds contempt. People are so used to seeing something in a particular form. Every time I challenge this by turning a dish on its head or interpreting it in a unique way, it encourages people to try something new and different. Maybe it’s this sense of adventure that they like?

“The Cinnamon Club experience always remains fresh, stimulating, challenging and familiar, all at the same time.”

Behind the scenes in the kitchen, how do you ensure perfection and craftsmanship from your team?

Perfection is not a destination, but a journey; a journey that becomes a lot easier when you start off with good ingredients and good planning, and ensures the team are able to deliver to a consistently high level. Most importantly are the team itself. We have been very lucky with our team who stay with us a long time, and grow and develop along the way. They quite literally own the food and the menu!

How do sister restaurants Cinnamon Kitchen and Cinnamon Soho compare to your flagship restaurant?

Our flagship restaurant is The Cinnamon Club, located in the heart of Westminster. Since first opening its doors in 2001, The Cinnamon Club has been redefining the expectations of Indian cooking; serving innovative and creative Indian cuisine in a contemporary fine dining setting.

Cinnamon Kitchen, our second restaurant in the City of London is high-energy, introduces theatrical dining with its open tandoor grill and offers people an interactive dining experience, as well as a flexible price point.

This year marks the restaurant’s 15th anniversary, what do you have planned to celebrate this landmark?

We’re marking the occasion with a series of exclusive events; a limited edition tasting menu; a six-course tasting menu showcasing some of the best elements from The Cinnamon Club’s most popular dishes – past and present – and pairing them with 15 year vintages of wines and spirits. Along with this, a selection of premium specially-designed cocktails; one-off chef collaborations and a brand new range of specialist products! Watch this space…

For a limited time only you can receive a luxurious free footstool, from our beautiful Southsea, Harvard, Coco and Gabrielle collections...
Click here for more information X